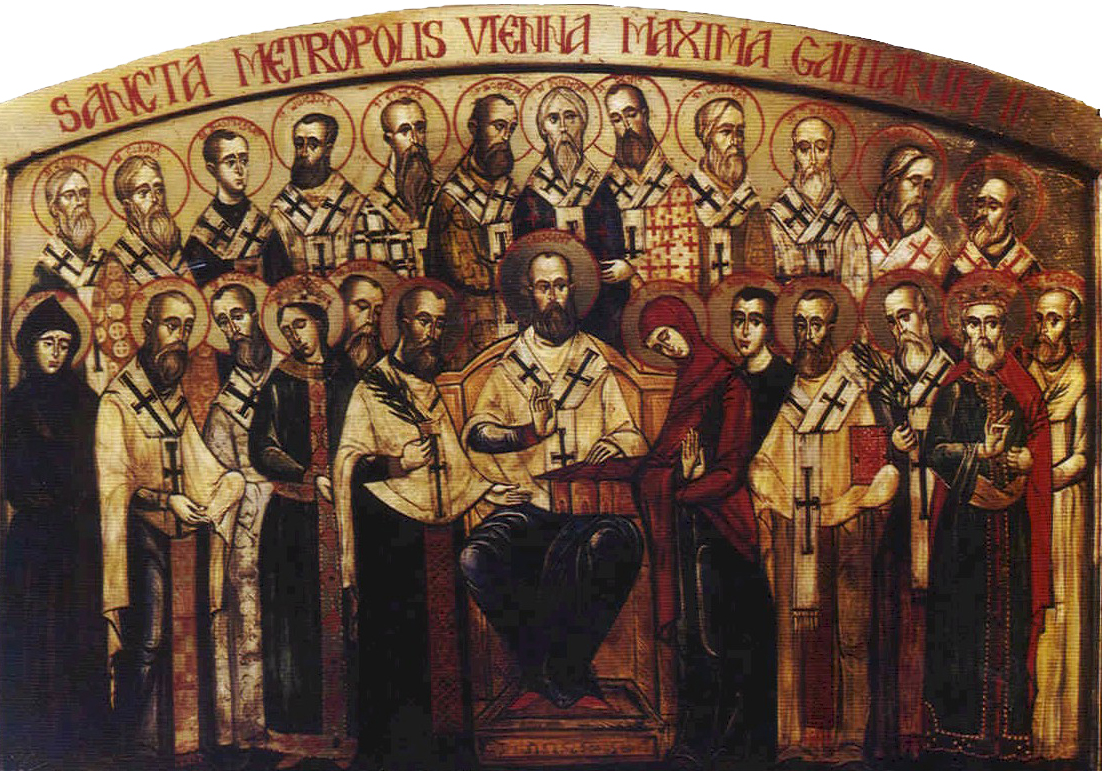 ALEXANDER, an early martyr in Rome, circa 150. Nothing further is known of his life or martyrdom.

AMELBERGA of MAUBEUGE, a member of what was later known as the Carolingian dynasty, St. Amelberga was married to Count Witger Duke of Lotharingia whilst still young. Their marriage produced three saints SS. Gudula of Brussels (8th January), Emebert of Cambrai (15th January), and Reineldis of Saintes (16th July). When the last of their children reached majority, St. Amelberga, and her husband each entered monasteries. St. Amelberga to Maubeuge Abbey (abbaye de Maubeuge) and Count Witger to the Abbey of St. Peter of Lobbes (abbaye Saint-Pierre de Lobbes) both in Hainaut (Belgium). The details of the lives of SS. Amelberga of Maubeuge and Amelberga of Temse (vide infra) are often intertwined, and though similarities exist, they were two separate and unrelated persons. St. Amelberga reposed circa 690.

AMELBERGA of TEMSE, a young woman from a Lotharingian noble family, St. Amelberga received monastic tonsure at Münsterbilsen Abbey (abbaye Sainte-Landrade de Munsterbilzen) in Limburg (present-day Belgium). The details of the lives of SS. Amelberga of Temse and Amelberga of Maubeuge (vide supra) are often intertwined, and though similarities exist, they were two separate and unrelated persons. St. Amelberga reposed circa 772, and her relics were later translated to Saint Peter's Abbey (Sint-Pietersabdij) in Ghent, Belgium.

JANUARIUS, MARINUS, NABOR, and FELIX, Martyrs of Africa, (Date Unknown), martyrs in North Africa of whom nothing further is known.

PETER of PERUGIA, Peter Vincioli born near Perugia in Umbria (central Italy), was an architect as well as a priest-monk. He founded and oversaw the building of an abbey as well construction and repairs of church properties throughout the diocese. St. Peter reposed in 1007.

RUFINA and SECUNDA of ROME, sisters who were martyred in 257 at Rome, during the persecutions of Christians under Emperor Valerian (r. 253–260).

Also available from your favourite e-bookstore!

Mosaic of Saint Apollinaris at the Basilica of Sant'Apollinare in Classe, Ravenna, Italy.

APOLLONIUS and EUGENE of ROME, (Date Unknown), the metrical Calendar of Dijon mentions these two martyrs, who were sentenced to die for being Christians. St. Apollonius was tied to a stake, and he was then shot to death by arrows. St. Eugene is said to have dauntlessly placed his neck on the executioner's block. No further information on these saints is extant.

CONAN of CORNWALL, an early Bishop of Cornwall, England, St. Conan was appointed to the See by Æthelstan, King of England (r. 924–939). From the limited information extant it appears he was consecrated sometime between July 924 and 932, though 20th century British historian D. P. Kirby, is of the opinion that it is almost certain St. Conan was consecrated in 936. St. Conan served as bishop until his repose sometime between 946 or 953 and November 955.

JOHN CASSIAN, following an extended time amongst the monks in the deserts of Egypt, where he received monastic tonsure, St. John travelled to Marseilles (southern France). While on his way to Marseilles, St. John spent time studying under St. John Chrysostom, who ordained him to the Diaconate. Once in Marseilles St. John established the Abbeys of St. Victor for men, and Saint-Sauveur for women. However, St. John is undoubtedly best remembered for his writings especially the Conferences and Institutes, which were highly praised by St. Benedict (11th July). There is some debate as to the year of St. John Cassian’s repose, ranging from 434-435 to 440-458.

LIBORIUS of LE MANS, the second Bishop of Le Mans (north-western France) from 348 until his repose circa 390. St. Liborius is the patron saint of Paderborn, Germany where his relics were translated in 836, and enshrined in the Cathedral of SS. Maria, Liborius, and Kilian.

PRIMITIVA of ROME, beyond the her name and Rome as the location or her martyrdom, there is absolutely no information on St. Primitiva extant. It is also very possible this saint is the same as the St. Primitiva whose feast is commemorated on (24th February)

RASYPHUS and RAVENNUS of MACÉ, (Fifth Century), natives of Britain who fled their country during the Anglo-Saxon invasions, settling in Normandy (northern France) where they lived as anchorites. They were martyred in Macé, and their relics are enshrined in Bayeux.

RASYPHUS of ROME, (Date Unknown), a martyr of whom nothing is known, but has been venerated in Rome since time immemorial.

ROMULA, REDEMPTA, and HERUNDO of ROME, hermitesses in Rome. Their life of self-denial so affected Pope St. Gregory the Dialogist (3rd September) that he based one of his still extant sermons on them. SS. Romula, Redempta, and Herundo all reposed circa 580.

TROPHIMUS and THEOPHILUS of ROME, two martyrs in Rome during the Diocletianic Persecution, circa 302.

VALERIAN of CIMEIZ, a monk at the Abbey of Our Lady of Lérins (abbaye Notre Dame de Lérins) on one of the Lérins Islands in the Mediterranean Ocean off the Côte d’Azur in France. who served as Bishop of Cimeiz (part of present-day Nice France) in the middle of the fifth century. The exact dates St. Valerian served as bishop are unknown, however, he is listed amongst the attendees at the Councils of Riez in 439 and Vaison in 442. St. Valerian reposed circa 460.